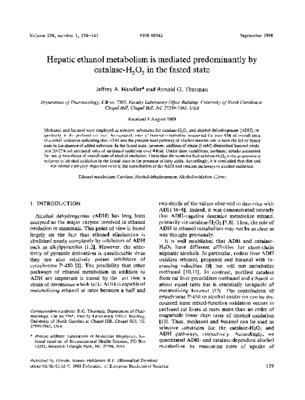 By Jeffrey A. Handler and Ronald G. Thurman
Get PDF (237 KB)

AbstractMethanol and butanol were employed as selective substrates for catalase-H2O2 and alcohol dehydrogenase (ADH), respectively, in the perfused rat liver. As expected, rates of butanol metabolism accounted for over 85% of overall rates of alcohol oxidation indicating that ADH was the predominant pathway of alcohol metabolism in both the fed or fasted state in the absence of added substrate. In the fasted state, however, addition of oleate (1 mM) diminished butanol oxidation 20–25% yet increased rates of methanol oxidation over 4-fold. Under these conditions, methanol uptake accounted for nearly two-thirds of overall rates of alcohol oxidation. These data demonstrate that catalase-H2O2 is the predominant pathway of alcohol oxidation in the fasted state in the presence of fatty acids. Accordingly, it is concluded that diet and nutritional state play important roles in the contribution of the ADH and catalase pathways to alcohol oxidation