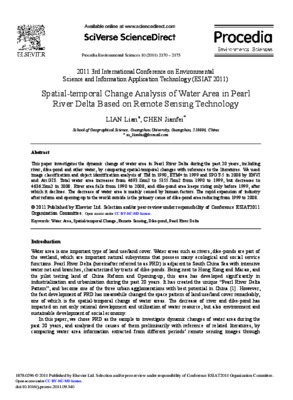 By Lian Lian and Chen Jianfei
Get PDF (1 MB)

AbstractThis paper investigates the dynamic change of water area in Pearl River Delta during the past 20 years, including river, dike-pond and other water, by comparing spatial-temporal changes with reference to the literatures. We used image classification and object identification analysis of TM in 1990, ETM+ in 1999 and SPOT-5 in 2008 by ENVI and ArcGIS. Total water area increases from 4693.1km2 to 5355.7km2 from 1990 to 1999, but decreases to 4636.2km2 in 2008. River area falls from 1990 to 2008, and dike-pond area keeps rising only before 1999, after which it declines. The decrease of water area is mainly caused by human factors. The rapid expansion of industry after reform and opening-up to the world outside is the primary cause of dike-pond area reducing from 1999 to 2008