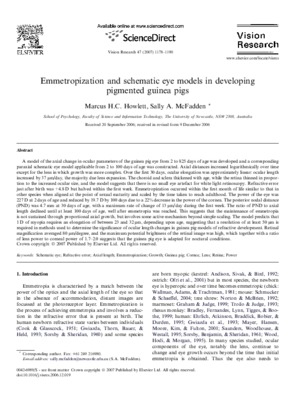 AbstractA model of the axial change in ocular parameters of the guinea pig eye from 2 to 825 days of age was developed and a corresponding paraxial schematic eye model applicable from 2 to 100 days of age was constructed. Axial distances increased logarithmically over time except for the lens in which growth was more complex. Over the first 30 days, ocular elongation was approximately linear: ocular length increased by 37μm/day, the majority due lens expansion. The choroid and sclera thickened with age, while the retina thinned in proportion to the increased ocular size, and the model suggests that there is no small eye artefact for white light retinoscopy. Refractive error just after birth was +4.8D but halved within the first week. Emmetropization occurred within the first month of life similar to that in other species when aligned at the point of sexual maturity and scaled by the time taken to reach adulthood. The power of the eye was 227D at 2 days of age and reduced by 19.7D by 100 days due to a 22% decrease in the power of the cornea. The posterior nodal distance (PND) was 4.7mm at 30 days of age, with a maximum rate of change of 13μm/day during the first week. The ratio of PND to axial length declined until at least 100 days of age, well after emmetropia was reached. This suggests that the maintenance of emmetropia is not sustained through proportional axial growth, but involves some active mechanism beyond simple scaling. The model predicts that 1D of myopia requires an elongation of between 23 and 32μm, depending upon age, suggesting that a resolution of at least 50μm is required in methods used to determine the significance of ocular length changes in guinea pig models of refractive development. Retinal magnification averaged 80μm/degree, and the maximum potential brightness of the retinal image was high, which together with a ratio of lens power to corneal power of 1.7–2.0 suggests that the guinea pig eye is adapted for noctural conditions