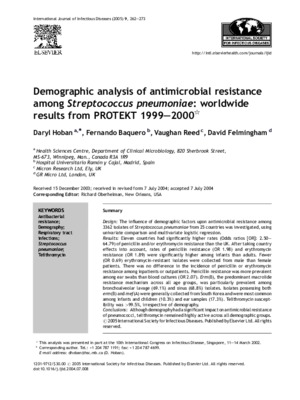 SummaryDesign:The influence of demographic factors upon antimicrobial resistance among 3362 isolates of Streptococcus pneumoniae from 25 countries was investigated, using univariate comparison and multivariate logistic regression.Results:Eleven countries had significantly higher rates (Odds ratios [OR]: 2.50–64.79) of penicillin and/or erythromycin resistance than the UK. After taking country effects into account, rates of penicillin resistance (OR 1.98) and erythromycin resistance (OR 1.89) were significantly higher among infants than adults. Fewer (OR 0.69) erythromycin-resistant isolates were collected from male than female patients. There was no difference in the incidence of penicillin or erythromycin resistance among inpatients or outpatients. Penicillin resistance was more prevalent among ear swabs than blood cultures (OR 2.07). Erm(B), the predominant macrolide resistance mechanism across all age groups, was particularly prevalent among bronchoalveolar lavage (69.1%) and sinus (68.8%) isolates. Isolates possessing both erm(B) and mef(A) were generally collected from South Korea and were most common among infants and children (10.3%) and ear samples (17.3%). Telithromycin susceptibility was >99.5%, irrespective of demography.Conclusions:Although demography had a significant impact on antimicrobial resistance of pneumococci, telithromycin remained highly active across all demographic groups