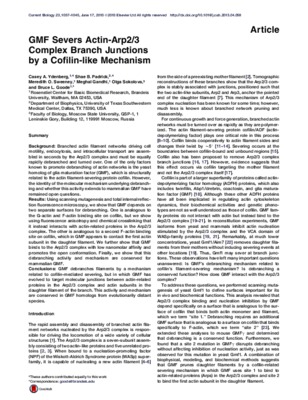 SummaryBackgroundBranched actin filament networks driving cell motility, endocytosis, and intracellular transport are assembled in seconds by the Arp2/3 complex and must be equally rapidly debranched and turned over. One of the only factors known to promote debranching of actin networks is the yeast homolog of glia maturation factor (GMF), which is structurally related to the actin filament-severing protein cofilin. However, the identity of the molecular mechanism underlying debranching and whether this activity extends to mammalian GMF have remained open questions.ResultsUsing scanning mutagenesis and total internal reflection fluorescence microscopy, we show that GMF depends on two separate surfaces for debranching. One is analogous to the G-actin and F-actin binding site on cofilin, but we show using fluorescence anisotropy and chemical crosslinking that it instead interacts with actin-related proteins in the Arp2/3 complex. The other is analogous to a second F-actin binding site on cofilin, which in GMF appears to contact the first actin subunit in the daughter filament. We further show that GMF binds to the Arp2/3 complex with low nanomolar affinity and promotes the open conformation. Finally, we show that this debranching activity and mechanism are conserved for mammalian GMF.ConclusionsGMF debranches filaments by a mechanism related to cofilin-mediated severing, but in which GMF has evolved to target molecular junctions between actin-related proteins in the Arp2/3 complex and actin subunits in the daughter filament of the branch. This activity and mechanism are conserved in GMF homologs from evolutionarily distant species