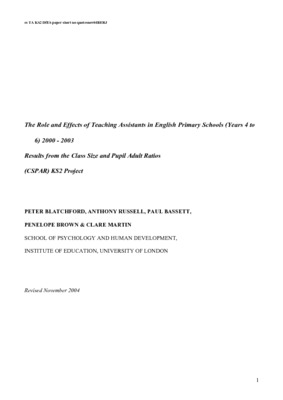 The role and effects of teaching assistants in English primary schools (Years 4 to 6) 2000-2003. Results from the Class Size and Pupil-Adult Ratios (CSPAR) KS2 Project

It is widely assumed that increasing the number of Teaching Assistants (TAs) in the classroom will be beneficial to children, and this is one important aim of the recently implemented Workforce Agreement. But there are still significant gaps in knowledge about many aspects of their deployment and impact. The Class Size and Pupil-Adult Ratio (CSPAR) KS2 study built on earlier findings when the pupils were in reception and KS1 and investigated: 1. the deployment of TAs in classrooms and how key parties involved perceived this; 2. the effect of TAs on interactions involving pupils and teachers in the same classrooms, and on pupil attainments. The study had a longitudinal, mixed method and multi-informant design. There were 202 schools, 332 classes and 8728 pupils in Y4. Methods of data collection included: for the whole sample) questionnaires completed by TAs, teachers and head teachers, assessments of pupil attainments in mathematics, English and science, data on pupil background, and (for a sub-sample) case studies and a systematic observation study. This study found that the TA’s role in KS2 is predominantly a direct one, in the sense of face-to-face interactions supporting certain pupils. There was no evidence that the presence of TAs, or any characteristic of TAs, had a measurable effect on pupil attainment. However, results were clear in showing that TAs had an indirect effect on teaching, e.g., pupils had a more active form of interaction with the teacher and there was more individualised teacher attention. This supported teachers’ views that TAs are effective in supporting them in this way. We conclude that more attention needs to be paid to what we call the pedagogical role of TAs so that they can be used effectively to help teachers and pupils, particularly in the context of the enhanced roles for TAs being introduced as part of the Government’s remodeling agenda