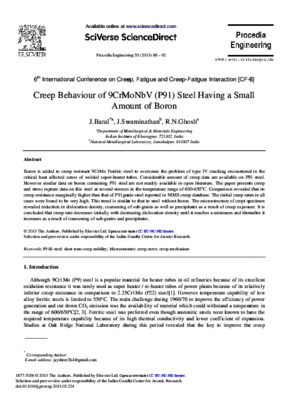 AbstractBoron is added to creep resistant 9CrMo Ferritic steel to overcome the problem of type IV cracking encountered in the critical heat affected zones of welded super-heater tubes. Considerable amount of creep data are available on P91 steel. However similar data on boron containing P91 steel are not readily available in open literature. The paper presen s creep and stress rupture data on this steel at several stresses in the temperature range of 600-650°C. Comparison revealed that its creep resistance marginally higher than that of P91grade steel reported in NIMS creep database. The initial creep rates in all cases were found to be very high. This trend is similar to that in steel without boron. The microstructure of crept specimen revealed reduction in dislocation density, coarsening of sub-grains as well as precipitates as a result of creep exposure. It is concluded that creep rate decreases initially with decreasing dislocation density until it reaches a minimum and thereafter it increases as a result of coarsening of sub-grains and precipitates