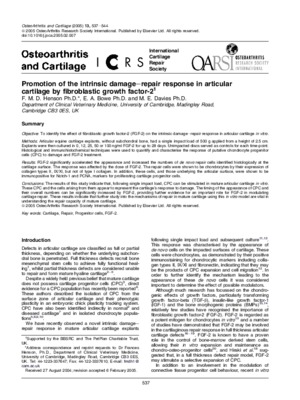 SummaryObjectiveTo identify the effect of fibroblastic growth factor-2 (FGF-2) on the intrinsic damage–repair response in articular cartilage in vitro.MethodsArticular equine cartilage explants, without subchondral bone, had a single impact load of 500g applied from a height of 2.5cm. Explants were then cultured in 0, 12, 25, 50 or 100ng/ml FGF-2 for up to 28 days. Unimpacted discs served as controls for each time-point. Histological and immunohistochemical techniques were used to quantify and characterise the response of putative chondrocyte progenitor cells (CPC) to damage and FGF-2 treatment.ResultsFGF-2 significantly accelerated the appearance and increased the numbers of de novo repair cells identified histologically at the cartilage surface. The response was affected by the dose of FGF-2. The repair cells were shown to be chondrocytes by their expression of collagen types II, IX/XI, but not of type I collagen. In addition, these cells, and those underlying the articular surface, were shown to be immunopositive for Notch-1 and PCNA, markers for proliferating cartilage progenitor cells.ConclusionsThe results of this study indicate that, following single impact load, CPC can be stimulated in mature articular cartilage in vitro. These CPC and the cells arising from them appear to represent the cartilage's response to damage. The timing of the appearance of CPC and their overall numbers can be significantly increased by FGF-2, providing further evidence for an important role for FGF-2 in modulating cartilage repair. These results indicate that further study into the mechanisms of repair in mature cartilage using this in vitro model are vital in understanding the repair capacity of mature cartilage