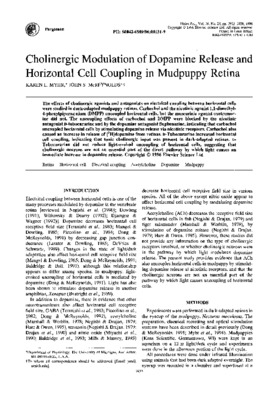 AbstractThe effects of cholinergic agonists and antagonists on electrical coupling between horizontal cells were studied in dark-adapted mudpuppy retinas. Carbachol and the nicotinic agonist 1,1-dimethyl-4-phenylpiperazinium (DMPP) uncoupled horizontal cells, but the muscarinic agonist oxotremorine did not. The uncoupling effects of carbachol and DMPP were blocked by the nicotinic antagonistd-tubocurarine and by the dopamine antagonist fluphenazine, indicating that carbachol uncoupled horizontal cells by stimulating dopamine release via nicotinic receptors. Carbachol also caused an increase in release of [3H]dopamine from retinas.d-Tubocurarine increased horizontal cell coupling, indicating that tonic cholinergic input was present in dark-adapted retinas.d-Tubocurarine did not reduce light-evoked uncoupling of horizontal cells, suggesting that cholinergic neurons are not an essential part of the direct pathway by which light causes an immediate increase in dopamine release