ABSTRACTFrom January 2003 to December 2005, 5091 susceptibility test results from invasive isolates of Escherichia coli, collected from blood cultures and cerebrospinal fluid routinely processed within 58 participating laboratories, were investigated. These laboratories in turn serviced 64 hospitals in Algeria, Cyprus, Egypt, Jordan, Lebanon, Malta, Morocco, Tunisia and Turkey. The median proportion of resistance to third-generation cephalosporins for the duration of the project was 18.9% (interquartile range (IQR): 12.5–30.8%), and for fluoroquinolones 21.0% (IQR: 7.7–32.6%). A substantial proportion of strains reported by laboratories in countries east of the Mediterranean exhibited evidence of multiresistance, the highest proportion being from Egypt (31%). There is clearly a need for further investigation of potential causes of the significant resistance identified, as well as for strengthening of national and international surveillance initiatives within this region 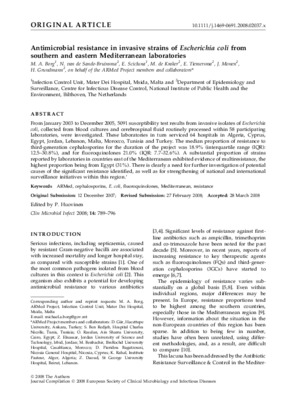 This paper was published in Elsevier - Publisher Connector .