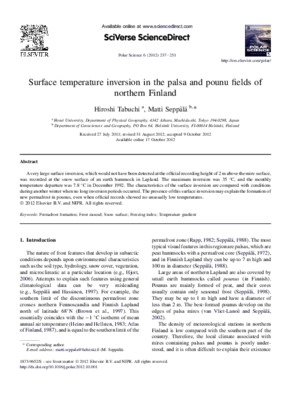 By Hiroshi Tabuchi and Matti Seppälä
Get PDF (2 MB)

AbstractA very large surface inversion, which would not have been detected at the official recording height of 2 m above the mire surface, was recorded at the snow surface of an earth hummock in Lapland. The maximum inversion was 35 °C, and the monthly temperature departure was 7.8 °C in December 1992. The characteristics of the surface inversion are compared with conditions during another winter when no long inversion periods occurred. The presence of this surface inversion may explain the formation of new permafrost in pounus, even when official records showed no unusually low temperatures