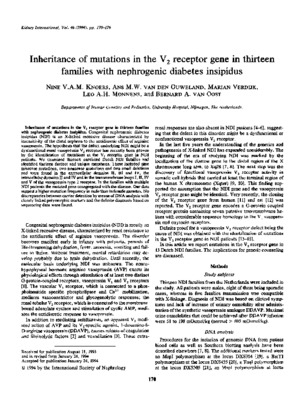 Inheritance of mutations in the V2 receptor gene in thirteen families with nephrogenic diabetes insipidus. Congenital nephrogenic diabetes insipidus (NDI) is an X-linked recessive disease characterized by insensitivity of the distal nephron to the antidiuretic effect of arginine vasopressin. The hypothesis that the defect underlying NDI might be a dysfunctional renal vasopressin V2 receptor has recently been proven by the identification of mutations in the V2 receptor gene in NDI patients. We examined thirteen unrelated Dutch NDI families and identified thirteen distinct and unique mutations. These included nine missense mutations, two nonsense mutations and two small deletions and were found in the extracellular domains II, III and IV, the intracellular domains II and IV and in the transmembrane loops I, II, IV and V of the vasopressin type 2 receptor. In the families with multiple NDI patients the mutated gene cosegregated with the disease. Our data suggest a higher mutation frequency in male than in female gametes. No discrepancies between carrier detection by means of DNA analysis with closely linked polymorphic markers and the definite diagnosis based on sequencing data were found