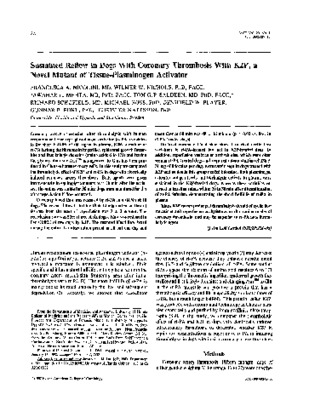 Sustained reflow in dogs with coronary thrombosis with K2P, a novel mutant of tissue-plasminogen activator

AbstractCoronary artery reocclusion after thrombolysis with human recombinant tissue-type plasminogen activator (rt-PA) is related to the short half-life of this agent in plasma. K2P, a mutant of rt-PA lacking the fibronectin fingerlike, epidermal growth factor-like and first kringle domains (amino acids 6 to 173) and having the glycosylation site Asn184mutagenized to Gln, has been produced in Chinese hamster ovary cells. In this study we compared the thrombolytic effect of K2P and rt-PA in dogs with electrically induced coronary artery thrombosis. Both agents were given intravenously in equimolar amounts over 20 min after the occlusive thrombus was stable for 30 min; dogs were monitored for 1 h after reperfusion if flow occurred.Coronary blood flow was restored by rt-PA in 6 (60%) of 10 dogs. The restored flow lasted for 49 ± 12 min and mean flow at 60 min from the start of reperfusion was 7 ± 3 ml/min. The reocclusion rate was 50% (three of six dogs). Flow was restored in five (100%) of five dogs by K2P. The restored blood flow lasted during the entire 1-h observation period in all but one dog and mean flow at 60 min was 49 ± 16 ml/min (p < 0.02 vs. flow in rt-PA-treated dogs).Restored coronary blood flow showed marked cyclic flow variations in rt-PA-treated but not in K2P-treated dogs. In addition, reperfusion ventricular arrhythmias, which were often seen in rt-PA-treated dogs and required administration of 126 ± 31 mg of lidocaine per dog, were rarely seen in dogs treated with K2P and no dog in this group needed lidocaine. Both plasminogen activator antigen levels and fibrinolytic activity in plasma were sustained in the K2P-treated dogs, whereas these variables returned to baseline values within 20 to 30 min after discontinuation of rt-PA infusion, demonstrating the short half-life of rt-PA in plasma.Thus, K2P causes prolonged thrombolysis devoid of cyclic flow variations and reperfusion arrhythmias in this canine model of coronary thrombosis, and may be superior to rt-PA as a thrombolytic agent