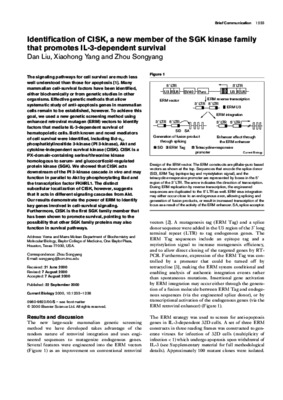 Identification of CISK, a new member of the SGK kinase family that promotes IL-3-dependent survival

AbstractThe signaling pathways for cell survival are much less well understood than those for apoptosis [1]. Many mammalian cell-survival factors have been identified, either biochemically or from genetic studies in other organisms. Effective genetic methods that allow systematic study of anti-apoptosis genes in mammalian cells remain to be established, however. To achieve this goal, we used a new genetic screening method using enhanced retroviral mutagen (ERM) vectors to identify factors that mediate IL-3-dependent survival of hematopoietic cells. Both known and novel mediators of cell survival were identified, including Bcl-xL, phosphatidylinositide 3-kinase (PI 3-kinase), Akt and cytokine-independent survival kinase (CISK). CISK is a PX-domain-containing serine/threonine kinase homologous to serum- and glucocorticoid-regulated protein kinase (SGK). We showed that CISK acts downstream of the PI 3-kinase cascade in vivo and may function in parallel to Akt by phosphorylating Bad and the transcription factor FKHRL1. The distinct subcellular localization of CISK, however, suggests that it acts in different signaling cascades from Akt. Our results demonstrate the power of ERM to identify key genes involved in cell-survival signaling. Furthermore, CISK is the first SGK family member that has been shown to promote survival, pointing to the possibility that other SGK family proteins may also function in survival pathways