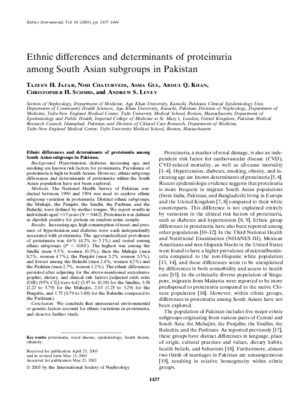 Ethnic differences and determinants of proteinuria among South Asian subgroups in Pakistan.BackgroundHypertension, diabetes, increasing age, and smoking are known risk factors for proteinuria. Prevalence of proteinuria is high in South Asians. However, ethnic subgroup differences and determinants of proteinuria within the South Asian population have not been explored.MethodsThe National Health Survey of Pakistan conducted between 1990 and 1994 was used to explore ethnic subgroup variation in proteinuria. Distinct ethnic subgroups, the Muhajir, the Punjabi, the Sindhi, the Pashtun, and the Baluchi, were defined by mother tongue. We report results in individuals aged ≥15 years (N = 9442). Proteinuria was defined as dipstick positive for protein on random urine sample.ResultsIncreasing age, high consumption of meat, and presence of hypertension and diabetes were each independently associated with proteinuria. The age-standardized prevalence of proteinuria was 4.6% (4.2% to 5.1%) and varied among ethnic subgroups (P < 0.001). The highest was among the Sindhi (men 9.5%, women 10.3%), then the Muhajir (men 8.2%, women 4.7%), the Punjabi (men 3.2% women 3.5%), and lowest among the Baluchi (men 2.4%, women 4.2%) and the Pashtun (men 2.7%, women 1.2%). The ethnic differences persisted after adjusting for the above-mentioned sociodemographic, dietary, and clinical risk factors [adjusted odds ratio (OR) (95% CI)] were 6.42 (3.97 to 10.38) for the Sindhis, 3.58 (2.22 to 5.79) for the Muhajirs, 2.03 (1.25 to 3.29) for the Punjabis, and 1.75 (0.79 to 3.88) for the Baluchis compared to the Pashtuns).ConclusionWe conclude that unmeasured environmental or genetic factors account for ethnic variations in proteinuria, and deserve further study