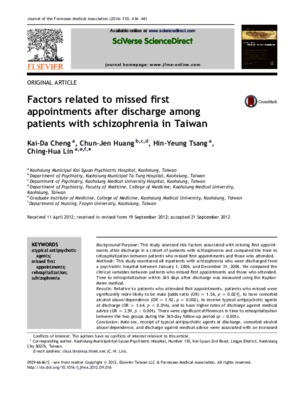 Background/PurposeThis study assessed risk factors associated with missing first appointments after discharge in a cohort of patients with schizophrenia and compared the time to rehospitalization between patients who missed first appointments and those who attended.MethodsThis study monitored all inpatients with schizophrenia who were discharged from a psychiatric hospital between January 1, 2006, and December 31, 2006. We compared the clinical variables between patients who missed first appointments and those who attended. Time to rehospitalization within 365 days after discharge was measured using the Kaplan-Meier method.ResultsRelative to patients who attended first appointments, patients who missed were significantly more likely to be male [odds ratio (OR) = 1.56, p = 0.021], to have comorbid alcohol abuse/dependence (OR = 1.92, p = 0.002), to receive typical antipsychotic agents at discharge (OR = 1.64, p = 0.016), and to have higher rates of discharge against medical advice (OR = 3.59, p < 0.001). There were significant differences in time to rehospitalization between the two groups during the 365-day follow-up period (p < 0.001).ConclusionMale sex, receipt of typical antipsychotic agents at discharge, comorbid alcohol abuse/dependence, and discharge against medical advice were associated with an increased likelihood of missing first appointments after discharge. Furthermore, patients with schizophrenia who did not comply with the first outpatient appointment after discharge were more likely to be rehospitalized. Future studies are needed in many different mental health systems to better generalize the findings in this study