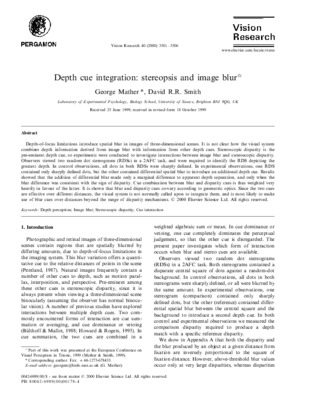 AbstractDepth-of-focus limitations introduce spatial blur in images of three-dimensional scenes. It is not clear how the visual system combines depth information derived from image blur with information from other depth cues. Stereoscopic disparity is the pre-eminent depth cue, so experiments were conducted to investigate interactions between image blur and stereoscopic disparity. Observers viewed two random dot stereograms (RDSs) in a 2AFC task, and were required to identify the RDS depicting the greatest depth. In control observations, all dots in both RDSs were sharply defined. In experimental observations, one RDS contained only sharply defined dots, but the other contained differential spatial blur to introduce an additional depth cue. Results showed that the addition of differential blur made only a marginal difference to apparent depth separation, and only when the blur difference was consistent with the sign of disparity. Cue combination between blur and disparity cues is thus weighted very heavily in favour of the latter. It is shown that blur and disparity cues co-vary according to geometric optics. Since the two cues are effective over different distances, the visual system is not normally called upon to integrate them, and is most likely to make use of blur cues over distances beyond the range of disparity mechanisms