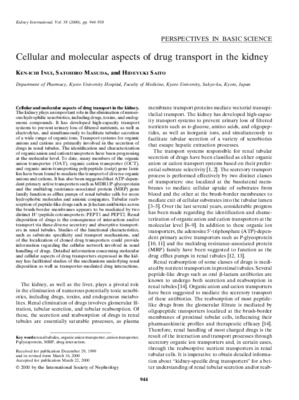 Cellular and molecular aspects of drug transport in the kidney

Cellular and molecular aspects of drug transport in the kidney. The kidney plays an important role in the elimination of numerous hydrophilic xenobiotics, including drugs, toxins, and endogenous compounds. It has developed high-capacity transport systems to prevent urinary loss of filtered nutrients, as well as electrolytes, and simultaneously to facilitate tubular secretion of a wide range of organic ions. Transport systems for organic anions and cations are primarily involved in the secretion of drugs in renal tubules. The identification and characterization of organic anion and cation transporters have been progressing at the molecular level. To date, many members of the organic anion transporter (OAT), organic cation transporter (OCT), and organic anion-transporting polypeptide (oatp) gene families have been found to mediate the transport of diverse organic anions and cations. It has also been suggested that ATP-dependent primary active transporters such as MDR1/P-glycoprotein and the multidrug resistance-associated protein (MRP) gene family function as efflux pumps of renal tubular cells for more hydrophobic molecules and anionic conjugates. Tubular reabsorption of peptide-like drugs such as β-lactam antibiotics across the brush-border membranes appears to be mediated by two distinct H+/peptide cotransporters: PEPT1 and PEPT2. Renal disposition of drugs is the consequence of interaction and/or transport via these diverse secretory and absorptive transporters in renal tubules. Studies of the functional characteristics, such as substrate specificity and transport mechanisms, and of the localization of cloned drug transporters could provide information regarding the cellular network involved in renal handling of drugs. Detailed information concerning molecular and cellular aspects of drug transporters expressed in the kidney has facilitated studies of the mechanisms underlying renal disposition as well as transporter-mediated drug interactions