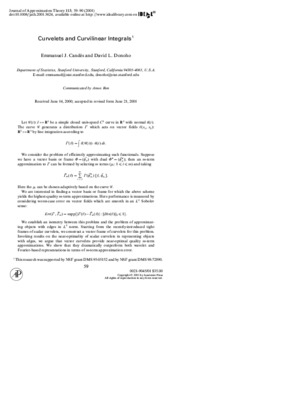 AbstractLet C(t):I↦R2 be a simple closed unit-speed C2 curve in R2 with normal [formula](t). The curve C generates a distribution Γ which acts on vector fields [formula](x1, x2):R2↦R2 by line integration according to[formula] We consider the problem of efficiently approximating such functionals. Suppose we have a vector basis or frame Φ=[formula] with dual Φ*=[formula]; then an m-term approximation to Γ can be formed by selecting m terms (μi:1⩽i⩽m) and taking[formula] Here the μi can be chosen adaptively based on the curve C. We are interested in finding a vector basis or frame for which the above scheme yields the highest-quality m-term approximations. Here performance is measured by considering worst-case error on vector fields which are smooth in an L2 Sobolev sense:[formula] We establish an isometry between this problem and the problem of approximating objects with edges in L2 norm. Starting from the recently-introduced tight frames of scalar curvelets, we construct a vector frame of curvelets for this problem. Invoking results on the near-optimality of scalar curvelets in representing objects with edges, we argue that vector curvelets provide near-optimal quality m-term approximations. We show that they dramatically outperform both wavelet and Fourier-based representations in terms of m-term approximation error. The m-term approximations to Γ are built from terms with support approaching more and more closely the curve C with increasing m; the terms have support obeying the scaling law width≈length2. Comparable results can be developed, with additional work, for scalar curvelet approximation in the case of scalar integrandsI(f)=∫f(C(t))dt