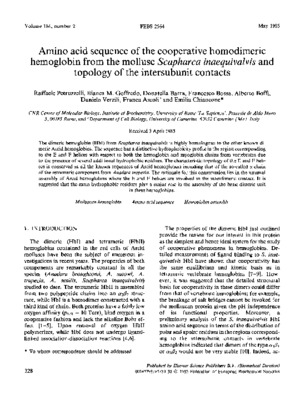 AbstractThe dimeric hemoglobin (HbI) from Scapharca inaequivalvis is highly homologous to the other known dimeric Arcid hemoglobins. The sequence has a distinctive hydrophobicity profile in the region corresponding to the E and F helices with respect to both the hemoglobin and myoglobin chains from vertebrates due to the presence of several additional hydrophobic residues. The characteristic topology of the E and F helices is conserved in all the known sequences of Arcid hemoglobins including that of the so-called α chain of the tetrameric component from Anadara trapezia. The rationale for this conservation lies in the unusual assembly of Arcid hemoglobins where the E and F helices are involved in the interdimeric contact. It is suggested that the extra hydrophobic residues play a major role in the assembly of the basic dimeric unit in these hemoglobins