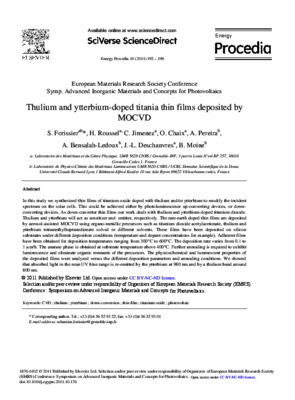 AbstractIn this study we synthesized thin films of titanium oxide doped with thulium and/or ytterbium to modify the incident spectrum on the solar cells. This could be achieved either by photoluminescence up-converting devices, or downconverting devices. As down-converter thin films our work deals with thulium and ytterbium-doped titanium dioxide. Thulium and ytterbium will act as sensitizer and emitter, respectively. The rare-earth doped thin films are deposited by aerosol-assisted MOCVD using organo-metallic precursors such as titanium dioxide acetylacetonate, thulium and ytterbium tetramethylheptanedionate solved in different solvents. These films have been deposited on silicon substrates under different deposition conditions (temperature and dopant concentrations for example). Adherent films have been obtained for deposition temperatures ranging from 300°C to 600°C. The deposition rate varies from 0.1 to 1μm/h. The anatase phase is obtained at substrate temperature above 400°C. Further annealing is required to exhibit luminescence and eliminate organic remnants of the precursors. The physicochemical and luminescent properties of the deposited films were analyzed versus the different deposition parameters and annealing conditions. We showed that absorbed light in the near-UV blue range is re-emitted by the ytterbium at 980nm and by a thulium band around 800nm