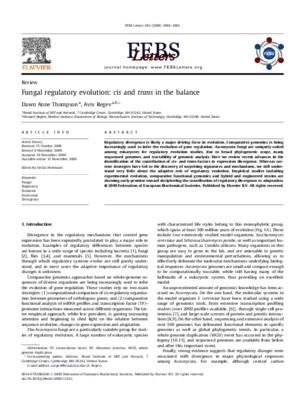 Fungal regulatory evolution: cis and trans in the balance

By Dawn Anne Thompson and Aviv Regev
Get PDF (279 KB)

AbstractRegulatory divergence is likely a major driving force in evolution. Comparative genomics is being increasingly used to infer the evolution of gene regulation. Ascomycota fungi are uniquely suited among eukaryotes for regulatory evolution studies, due to broad phylogenetic scope, many sequenced genomes, and tractability of genomic analysis. Here we review recent advances in the identification of the contribution of cis- and trans-factors to expression divergence. Whereas current strategies have led to the discovery of surprising signatures and mechanisms, we still understand very little about the adaptive role of regulatory evolution. Empirical studies including experimental evolution, comparative functional genomics and hybrid and engineered strains are showing early promise toward deciphering the contribution of regulatory divergence to adaptation