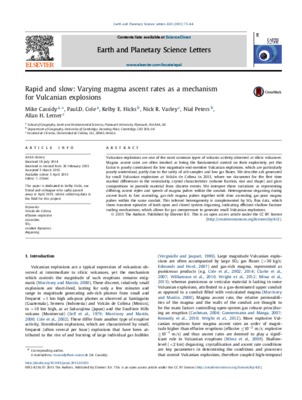 Rapid and slow: Varying magma ascent rates as a mechanism for Vulcanian explosions

AbstractVulcanian explosions are one of the most common types of volcanic activity observed at silicic volcanoes. Magma ascent rates are often invoked as being the fundamental control on their explosivity, yet this factor is poorly constrained for low magnitude end-member Vulcanian explosions, which are particularly poorly understood, partly due to the rarity of ash samples and low gas fluxes. We describe ash generated by small Vulcanian explosions at Volcán de Colima in 2013, where we document for the first time marked differences in the vesicularity, crystal characteristics (volume fraction, size and shape) and glass compositions in juvenile material from discrete events. We interpret these variations as representing differing ascent styles and speeds of magma pulses within the conduit. Heterogeneous degassing during ascent leads to fast ascending, gas-rich magma pulses together with slow ascending gas-poor magma pulses within the same conduit. This inferred heterogeneity is complemented by SO2 flux data, which show transient episodes of both open and closed system degassing, indicating efficient shallow fracture sealing mechanisms, which allows for gas overpressure to generate small Vulcanian explosions