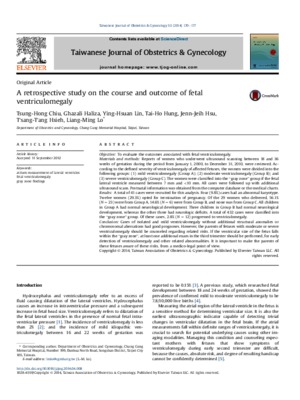 A retrospective study on the course and outcome of fetal ventriculomegaly

AbstractObjectiveTo evaluate the outcomes associated with fetal ventriculomegaly.Materials and methodsReports of women who underwent ultrasound scanning between 18 and 36 weeks of gestation during the period from January 1, 2000, to December 31, 2010, were reviewed. According to the defined severity of ventriculomegaly of affected fetuses, the women were divided into the following groups: (1) mild ventriculomegaly (Group A); (2) moderate ventriculomegaly (Group B); and (3) severe ventriculomegaly (Group C). The women were classified into the “gray zone” group if the fetal lateral ventricle measured between 7 mm and <10 mm. All cases were followed up with additional ultrasound scans. Postnatal information was obtained from the computer database or the medical charts.ResultsA total of 41 cases were recruited for this analysis. Four (9.8%) cases had an abnormal karyotype. Twelve women (29.3%) opted for termination of pregnancy. Of the 29 women who delivered, 56.1% (N = 23) were from Group A, 14.6% (N = 6) were from Group B, and none was from Group C. All children in Group A had normal neurological development. Three children in Group B had normal neurological development, whereas the other three had neurologic deficits. A total of 432 cases were classified into the “gray zone” group. Of these cases, 2.8% (N = 12) progressed to ventriculomegaly.ConclusionCases of isolated and mild ventriculomegaly without additional structural anomalies or chromosomal aberrations had good prognoses. However, the parents of fetuses with moderate or severe ventriculomegaly should be counseled regarding related risks. If the ventricular size of the fetus falls within the “gray zone”, at least one additional exam in the third trimester should be performed, for early detection of ventriculomegaly and other related abnormalities. It is important to make the parents of these fetuses aware of these risks, from a medico-legal point of view