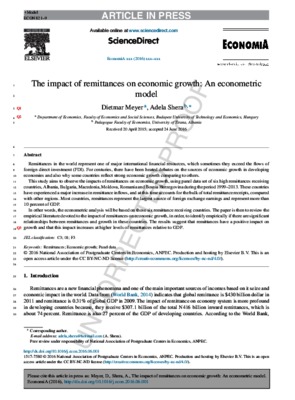 The impact of remittances on economic growth: An econometric model

By Dietmar Meyer and Adela Shera
Get PDF (559 KB)

AbstractRemittances in the world represent one of major international financial resources, which sometimes they exceed the flows of foreign direct investment (FDI). For centuries, there have been heated debates on the sources of economic growth in developing economies and also why some countries reflect strong economic growth comparing to others.This study aims to observe the impacts of remittances on economic growth, using panel data set of six high remittances receiving countries, Albania, Bulgaria, Macedonia, Moldova, Romania and Bosnia Herzegovina during the period 1999–2013. These countries have experienced a major increase in remittance inflows, and at this time accounts for the bulk of total remittance receipts, compared with other regions. Most countries, remittances represent the largest source of foreign exchange earnings and represent more than 10 percent of GDP.In other words, the econometric analysis will be based on those six remittance receiving countries. The paper is then to review the empirical literature devoted to the impact of remittances on economic growth, in order, to identify empirically if there are significant relationships between remittances and growth in these countries. The results suggest that remittances have a positive impact on growth and that this impact increases at higher levels of remittances relative to GDP