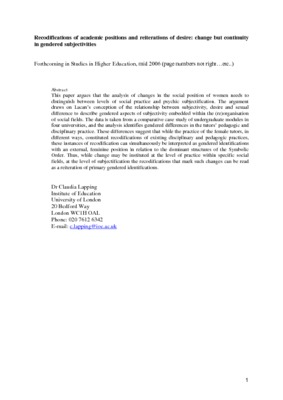 Recodifications of academic positions and reiterations of desire: change but continuity in gendered subjectivities

This paper argues that the analysis of changes in the social position of women needs to distinguish between levels of social practice and psychic subjectification. The argument draws on Lacan's conception of the relationship between subjectivity, desire and sexual difference to describe gendered aspects of subjectivity embedded within the (re)organisation of social fields. The data is taken from a comparative case study of undergraduate modules in four universities, and the analysis identifies gendered differences in the tutors? pedagogic and disciplinary practice. These differences suggest that while the practice of the female tutors, in different ways, constituted recodifications of existing disciplinary and pedagogic practices, these instances of recodification can simultaneously be interpreted as gendered identifications with an external, feminine position in relation to the dominant structures of the Symbolic Order. Thus, while change may be instituted at the level of practice within specific social fields, at the level of subjectification the recodifications that mark such changes can be read as a reiteration of primary gendered identifications