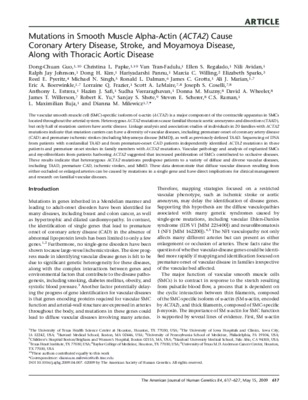 The vascular smooth muscle cell (SMC)-specific isoform of α-actin (ACTA2) is a major component of the contractile apparatus in SMCs located throughout the arterial system. Heterozygous ACTA2 mutations cause familial thoracic aortic aneurysms and dissections (TAAD), but only half of mutation carriers have aortic disease. Linkage analysis and association studies of individuals in 20 families with ACTA2 mutations indicate that mutation carriers can have a diversity of vascular diseases, including premature onset of coronary artery disease (CAD) and premature ischemic strokes (including Moyamoya disease [MMD]), as well as previously defined TAAD. Sequencing of DNA from patients with nonfamilial TAAD and from premature-onset CAD patients independently identified ACTA2 mutations in these patients and premature onset strokes in family members with ACTA2 mutations. Vascular pathology and analysis of explanted SMCs and myofibroblasts from patients harboring ACTA2 suggested that increased proliferation of SMCs contributed to occlusive diseases. These results indicate that heterozygous ACTA2 mutations predispose patients to a variety of diffuse and diverse vascular diseases, including TAAD, premature CAD, ischemic strokes, and MMD. These data demonstrate that diffuse vascular diseases resulting from either occluded or enlarged arteries can be caused by mutations in a single gene and have direct implications for clinical management and research on familial vascular diseases