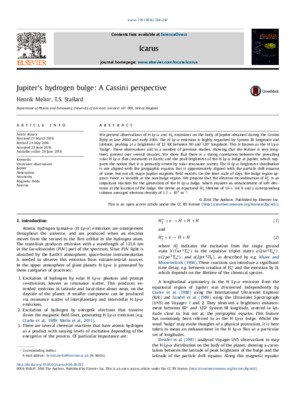 By Henrik Melin and T.S. Stallard
Get PDF (1 MB)

AbstractWe present observations of H Ly-α and H2 emissions on the body of Jupiter obtained during the Cassini flyby in late 2000 and early 2001. The H Ly-α emission is highly organised by System III longitude and latitude, peaking at a brightness of 22 kR between 90 and 120° longitude. This is known as the H Ly-α ‘bulge’. These observations add to a number of previous studies, showing that the feature is very long-lived, present over several decades. We show that there is a strong correlation between the prevailing solar H Ly-α flux (measured at Earth) and the peak brightness of the H Ly-α bulge at Jupiter, which supports the notion that it is primarily driven by solar resonance scatter. The H Ly-α brightness distribution is not aligned with the jovigraphic equator, but is approximately aligned with the particle drift equator of some, but not all, major Jupiter magnetic field models. On the time scale of days, the bulge region appears twice as variable as the non-bulge region. We propose that the electron recombination of H3+ is an important reaction for the generation of the H Ly-α bulge, which requires an enhancement of soft electrons at the location of the bulge. We derive an equatorial H3+ lifetime of 1.6 ± 0.4 h and a corresponding column averaged electron density of 1.7 × 109 m−3