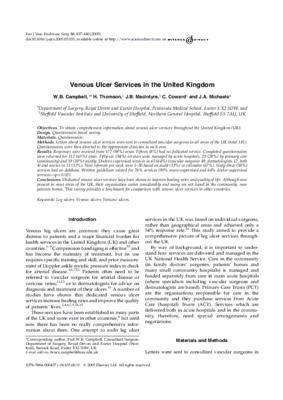 AbstractObjectivesTo obtain comprehensive information about venous ulcer services throughout the United Kingdom (UK).DesignQuestionnaire based survey.MaterialsQuestionnaire.MethodsLetters about venous ulcer services were sent to consultant vascular surgeons in all areas of the UK (total 181). Questionnaires were then directed to the appropriate clinician in each area.ResultsResponses were received from 177 (98%) areas. Fifteen (8%) had no dedicated service. Completed questionnaires were returned for 112 (63%) areas. Fifty-six (54%) services were managed by acute hospitals, 29 (28%) by primary care (community) and 19 (18%) jointly. Doctors supervised services in 65 (64%) (vascular surgeons 49, dermatologists 12, both 4) and nurses in 31 (33%). New referrals per week were 1–50 based on audit (33%) or estimates (67%). Sixty-three (58%) services had no database. Written guidelines existed for 76% services (90% nurse-supervised and 64% doctor-supervised services—p<0.02).ConclusionsDedicated venous ulcer services have been shown to improve healing rates and quality of life. Although now present in most areas of the UK, their organisation varies considerably and many are not based in the community, near patients homes. This survey provides a benchmark for comparison with venous ulcer services in other countries