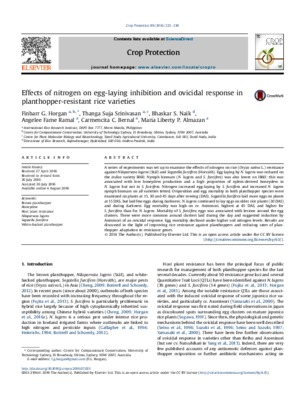 AbstractA series of experiments was set up to examine the effects of nitrogen on rice (Oryza sativa L.) resistance against Nilaparvata lugens (Stål) and Sogatella furcifera (Horváth). Egg laying by N. lugens was reduced on the indica variety IR60. Nymph biomass (N. lugens and S. furcifera) was also lower on IR60: this was associated with low honeydew production and a high proportion of xylem-derived honeydew in N. lugens but not in S. furcifera. Nitrogen increased egg-laying by S. furcifera and increased N. lugens nymph biomass on all varieties tested. Oviposition and egg mortality in both planthopper species were examined on plants at 15, 30 and 45 days after sowing (DAS). Sogatella furcifera laid more eggs on plants at 15 DAS, but laid few eggs during darkness; N. lugens continued to lay eggs on older rice plants (30 DAS) and during darkness. Egg mortality was high on cv. Asiminori, highest at 45 DAS, and higher for S. furcifera than for N. lugens. Mortality of S. furcifera eggs was associated with lesions around the egg clusters. These were more common around clusters laid during the day and suggested induction by Asiminori of an ovicidal response. Egg mortality declined under higher soil nitrogen levels. Results are discussed in the light of improving rice resistance against planthoppers and reducing rates of planthopper adaptation to resistance genes