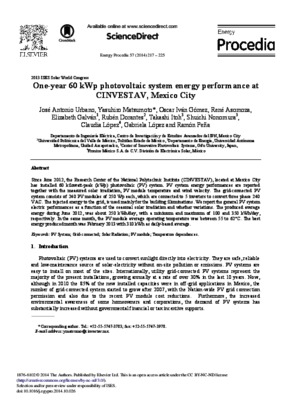 AbstractSince June 2012, the Research Center of the National Polytechnic Institute (CINVESTAV), located at Mexico City has installed 60 kilowatt-peak (kWp) photovoltaic (PV) system. PV system energy performances are reported together with the measured solar irradiation, PV module temperature and wind velocity. The grid-connected PV system consists of 240 PV modules of 250 Wp each, which are connected to 5 inverters to convert three phase 240 VAC. The injected energy to the grid, is used mainly for the building illuminations. We report the general PV system electric performances as a function of the seasonal solar irradiation and whether variations. The produced average energy during June 2012, was about 250 kWh/day, with a minimum and maximum of 100 and 350 kWh/day, respectively. In the same month, the PV module average operating temperature was between 55 to 62°C. The best energy produced month was February 2013 with 310 kWh as daily-based average