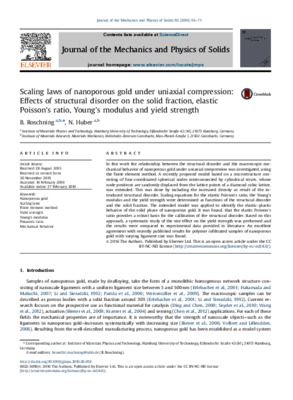 AbstractIn this work the relationship between the structural disorder and the macroscopic mechanical behavior of nanoporous gold under uniaxial compression was investigated, using the finite element method. A recently proposed model based on a microstructure consisting of four-coordinated spherical nodes interconnected by cylindrical struts, whose node positions are randomly displaced from the lattice points of a diamond cubic lattice, was extended. This was done by including the increased density as result of the introduced structural disorder. Scaling equations for the elastic Poisson's ratio, the Young's modulus and the yield strength were determined as functions of the structural disorder and the solid fraction. The extended model was applied to identify the elastic–plastic behavior of the solid phase of nanoporous gold. It was found, that the elastic Poisson's ratio provides a robust basis for the calibration of the structural disorder. Based on this approach, a systematic study of the size effect on the yield strength was performed and the results were compared to experimental data provided in literature. An excellent agreement with recently published results for polymer infiltrated samples of nanoporous gold with varying ligament size was found