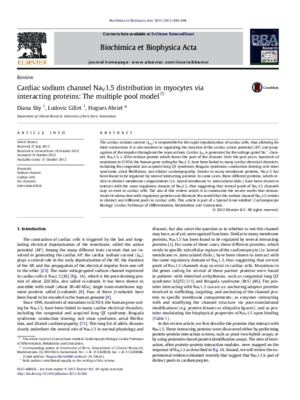 AbstractThe cardiac sodium current (INa) is responsible for the rapid depolarization of cardiac cells, thus allowing for their contraction. It is also involved in regulating the duration of the cardiac action potential (AP) and propagation of the impulse throughout the myocardium. Cardiac INa is generated by the voltage-gated Na+ channel, NaV1.5, a 2016-residue protein which forms the pore of the channel. Over the past years, hundreds of mutations in SCN5A, the human gene coding for NaV1.5, have been linked to many cardiac electrical disorders, including the congenital and acquired long QT syndrome, Brugada syndrome, conduction slowing, sick sinus syndrome, atrial fibrillation, and dilated cardiomyopathy. Similar to many membrane proteins, NaV1.5 has been found to be regulated by several interacting proteins. In some cases, these different proteins, which reside in distinct membrane compartments (i.e. lateral membrane vs. intercalated disks), have been shown to interact with the same regulatory domain of NaV1.5, thus suggesting that several pools of NaV1.5 channels may co-exist in cardiac cells. The aim of this review article is to summarize the recent works that demonstrate its interaction with regulatory proteins and illustrate the model that the sodium channel NaV1.5 resides in distinct and different pools in cardiac cells. This article is part of a Special Issue entitled: Cardiomyocyte Biology: Cardiac Pathways of Differentiation, Metabolism and Contraction