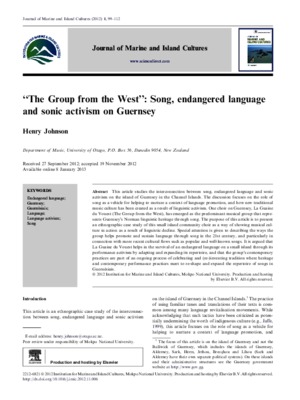 “The Group from the West”: Song, endangered language and sonic activism on Guernsey

By Henry Johnson
Get PDF (2 MB)

AbstractThis article studies the interconnection between song, endangered language and sonic activism on the island of Guernsey in the Channel Islands. The discussion focuses on the role of song as a vehicle for helping to nurture a context of language promotion, and how new traditional music culture has been created as a result of linguistic activism. One choir on Guernsey, La Guaine du Vouest (The Group from the West), has emerged as the predominant musical group that represents Guernsey’s Norman linguistic heritage through song. The purpose of this article is to present an ethnographic case study of this small island community choir as a way of showing musical culture in action as a result of linguistic decline. Special attention is given to describing the ways the group helps promote and sustain language through song in the 21st century, and particularly in connection with more recent cultural flows such as popular and well-known songs. It is argued that La Guaine du Vouest helps in the survival of an endangered language on a small island through its performance activism by adapting and expanding its repertoire, and that the group’s contemporary practices are part of an ongoing process of celebrating and (re-)inventing tradition where heritage and contemporary performance practices meet to re-shape and expand the repertoire of songs in Guernésiais