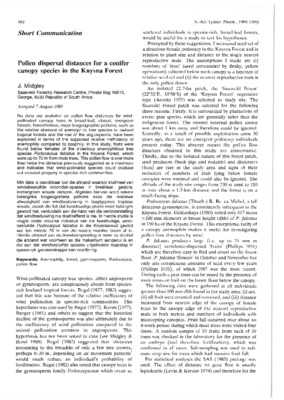 No data are available on pollen flow distances for wind-pollinated canopy trees in broad-leaf, closed, evergreen forests. Nevertheless, major biogeographic patterns, such as the relative absence of anemophilic tree species in lowland tropical forests and the rise of the angiosperms, have been explained in terms of the supposed relative inefficiency of anemophily compared to zoophily. In this study, fruits were found below females of the dioecious anemophilous tree species Podocarpus falcatus in the Knysna Forest, which were up to 70m from male trees. This pollen flow is over more than twice the distance previously suggested as a maximum and indicates that wind-pollinated species could produce out-crossed progeny in species-rich communities