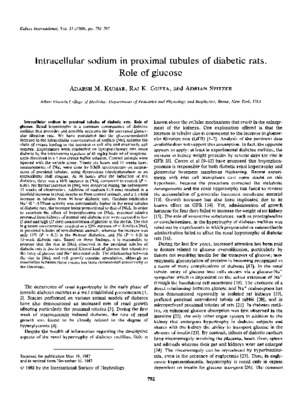 Intracellular sodium in proximal tubules of diabetic rats. Role of glucose. Renal hypertrophy is a common consequence of diabetes mellitus that precedes and possibly accounts for the increased glomerular filtration rate. We have postulated that the glucose-mediated increase in the intracellular concentration of sodium [Na]i initiates the chain of events leading to the increase in cell size and eventually cell number. Experiments were conducted on Sprague-Dawley rats made diabetic by the intravenous injection of 45 mg/kg body wt of streptozo-tocin dissolved in a 5mM citrate buffer solution. Control animals were injected with the vehicle alone. Ninety-six hours and 11 weeks later, measurements of [Na]i were done by NMR spectroscopy on suspensions of proximal tubules, using dysprosium tripolyphosphate as an extracellular shift reagent. At 96 hours after the induction of the diabetes, there was a 60% increase in [Na]i compared to control (P < 0.01). No further increase in [Na]i was observed during the subsequent 11 weeks of observation. Addition of ouabain (1.0mM) resulted in a fourfold increase in [Na]iin tubules from control animals, and a 2.5-fold increase in tubules from 96-hour diabetic rats. Ouabain-inhibitable Na+-K+-ATPase activity was substantially higher in the renal tubules of diabetic rats, the increase being proportional to that of [Na]i. In order to ascertain the effect of hyperglycemia on [Na]i proximal tubules prepared from kidneys of normal and diabetic rats were exposed to low (5mM) and high (25mM) concentration of glucose in the media. The rise in glucose concentration resulted in a 52 increase (P < 0.001) in [Na]i in proximal tubules of non-diabetic animals, whereas the increase was only 11% (P > 0.2) in the 96-hour diabetics, and 5% (P > 0.2) in 11-week diabetic rats. Based on these findings, it is reasonable to propose that the rise in [Na]i observed in the proximal tubules of diabetic rats is due to increased filtered load of glucose that stimulates the entry of glucose and Na+ into renal cells. The relationship between the rise in [Na]i and cell growth remains speculative, although an association between these events has been documented consistently in the literature