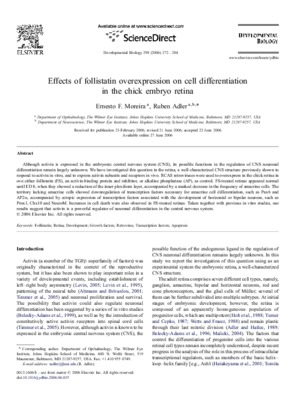 By Ernesto F. Moreira and Ruben Adler
Get PDF (841 KB)

AbstractAlthough activin is expressed in the embryonic central nervous system (CNS), its possible functions in the regulation of CNS neuronal differentiation remain largely unknown. We have investigated this question in the retina, a well-characterized CNS structure previously shown to respond to activin in vitro, and to express activin subunits and receptors in vivo. RCAS retroviruses were used to overexpress in the chick retina in ovo either follistatin (FS), an activin-binding protein and inhibitor, or alkaline phosphatase (AP), as control. FS-treated retinas appeared normal until ED 8, when they showed a reduction of the inner plexiform layer, accompanied by a marked decrease in the frequency of amacrine cells. The territory lacking amacrine cells showed downregulation of transcription factors necessary for amacrine cell differentiation, such as Pax6 and AP2α, accompanied by ectopic expression of transcription factors associated with the development of horizontal or bipolar neurons, such as Prox1, Chx10 and NeuroM. Increases in cell death were also observed in FS-treated retinas. Taken together with previous in vitro studies, our results suggest that activin is a powerful regulator of neuronal differentiation in the central nervous system