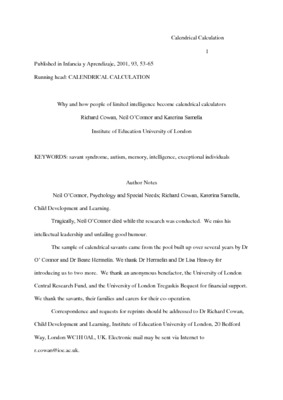 Why and how people of limited intelligence become calendrical calculators

Calendrical calculation is the rare talent of naming the days of the week for dates in the past and future. Calendrical savants are people with low measured intelligence who have this talent. This paper reviews evidence and speculation about why people become calendrical savants and how they answer date questions. Most savants are known to have intensively studied the calendar and show superior memory for calendrical information. As a result they may answer date questions either from recalling calendars or by using strategies that exploit calendrical regularities. While people of average or superior intelligence may become calendrical calculators through internalising formulae, the arithmetical demands of the formulae make them unlikely as bases for the talents of calendrical savants. We attempt to identify the methods used by a sample of 10 savants. None rely on an internalised formula. Some use strategies based on calendrical regularities probably in conjunction with memory for a range of years. For the rest a decision between use of regularities and recall of calendars cannot be made