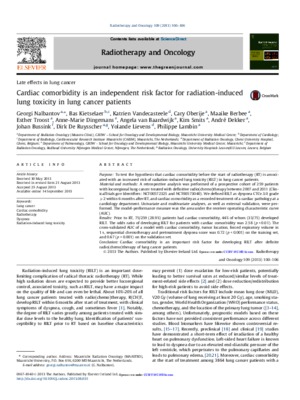 AbstractPurposeTo test the hypothesis that cardiac comorbidity before the start of radiotherapy (RT) is associated with an increased risk of radiation-induced lung toxicity (RILT) in lung cancer patients.Material and methodsA retrospective analysis was performed of a prospective cohort of 259 patients with locoregional lung cancer treated with definitive radio(chemo)therapy between 2007 and 2011 (ClinicalTrials.gov Identifiers: NCT00572325 and NCT00573040). We defined RILT as dyspnea CTCv.3.0 grade ⩾2 within 6months after RT, and cardiac comorbidity as a recorded treatment of a cardiac pathology at a cardiology department. Univariate and multivariate analyses, as well as external validation, were performed. The model-performance measure was the area under the receiver operating characteristic curve (AUC).ResultsPrior to RT, 75/259 (28.9%) patients had cardiac comorbidity, 44% of whom (33/75) developed RILT. The odds ratio of developing RILT for patients with cardiac comorbidity was 2.58 (p<0.01). The cross-validated AUC of a model with cardiac comorbidity, tumor location, forced expiratory volume in 1s, sequential chemotherapy and pretreatment dyspnea score was 0.72 (p<0.001) on the training set, and 0.67 (p<0.001) on the validation set.ConclusionCardiac comorbidity is an important risk factor for developing RILT after definite radio(chemo)therapy of lung cancer patients