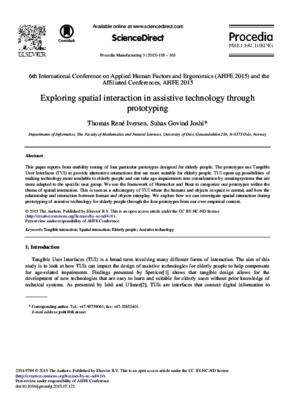 AbstractThis paper reports from usability testing of four particular prototypes designed for elderly people. The prototypes use Tangible User Interfaces (TUI) to provide alternative interactions that are more suitable for elderly people. TUI opens up possibilities of making technology more available to elderly people and can take age impairments into consideration by creating systems that are more adapted to the specific user group. We use the framework of Hornecker and Buur to categorize our prototypes within the theme of spatial interaction. This is seen as a subcategory of TUI where the humans and objects in space is central, and how the relationship and interaction between human and objects interplay. We explore how we can investigate spatial interaction during prototyping of assistive technology for elderly people through the four prototypes from our own empirical context