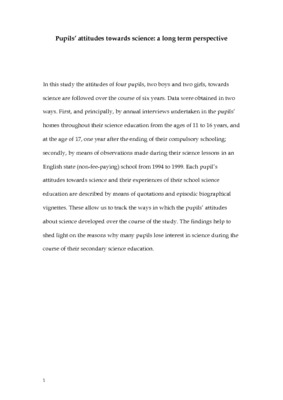 In this study the attitudes of four pupils, two boys and two girls, towards science are followed over the course of six years. Data were obtained in two ways. First, and principally, by annual interviews undertaken in the pupils' homes throughout their science education from the ages of 11 to 16 years, and at the age of 17, one year after the ending of their compulsory schooling; secondly, by means of observations made during their science lessons in an English state (non-fee-paying) school from 1994 to 1999. Each pupil's attitudes towards science and their experiences of their school science education are described by means of quotations and episodic biographical vignettes. These allow us to track the ways in which the pupils' attitudes about science developed over the course of the study. The findings help to shed light on the reasons why many pupils lose interest in science during the course of their secondary science education