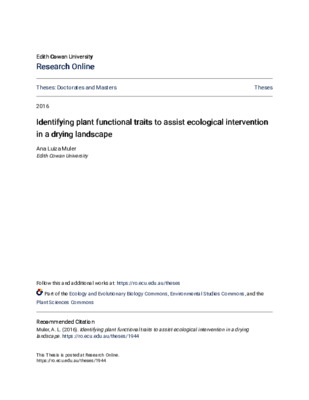 Mediterranean-type ecosystems (MTEs) are among the most vulnerable to land use and climate change and many attempts are in place to restore these ecosystems. Therefore, it is necessary to assess differences in plants’ ability to withstand water-stress, including biotic interactions. Such knowledge helps us understand community assembly, which is crucial for ecological intervention. This study involved: (1) reviewing the literature on traits that can differentiate functional types; (2) adapting the methodology to measure leaf water potential at turgor loss point (πtlp) for small-leaved species; (3) using these traits to quickly identify water-use strategies of adult plants from Southwest Australia; (4) identifying the water-use strategies that juveniles have to survive first summer drought; and (5) determining whether there is facilitation between a deep-rooted species and seedlings through hydraulic redistribution. The selection of functional response traits was based on their association with water-stress, with effect traits, and on methodologies that are easy, inexpensive and applicable for Mediterranean species. Relevant traits were identified from the literature, including: leaf carbon isotope composition, leaf nitrogen and phosphorus contents, leaf mass per area, πtlp, and xylem vessel morphology. Measurements of πtlp through osmometry of extracted sap and through Pressure-volume curves were compared. Selected traits were then measured for 15 species from different eco-hydrological habitats. Drought resistance of juveniles was assessed by measuring water relations, rooting depth/pattern and carbon reserves use of species from different eco-hydrological habitats. Lastly, seedlings were grown isolated or near donor plants. Water status and growth were measured, and stable isotopes were used to investigate water pathways within and between plants. A strong correlation between the methodologies for measuring πtlp was found. With analysis of these traits, it was possible to cluster adult species, from the Swan Coastal plain, into five functional groups that corresponded to their rooting depths. During drought, Banksia seedlings reduced stomatal conductance and appeared to use carbon reserves, whereas Gompholobium tomentosum seedlings tolerated higher water deficits, despite reduced stomatal conductance. Lastly, although seedlings were able to absorb hydraulically redistributed water, they grew, transpired and survived more when isolated from the deep-rooted plant. In the literature review, theoretical analyses on functional traits and speculations on functional groups were made through a conceptual diagram. The osmometry technique is a suitable replacement for Pressure-volume curves since its estimations of πtlp were accurate in small and large-leaved species. The functional traits approach can be transferable to other MTEs for application by restoration practitioners, as the traits selected were effective in determining functional groups, and were relatively easy and cost effective. The seedlings’ responses to summer drought were consistent with their habitats and root-depth, which is an important factor for niche differentiating and community assembly. Competition between seedlings and deep-rooted plants supported the updated stress-gradient hypothesis. In conclusion, analyses of water-use strategies of Mediterranean species during summer allow predictions of differences in drought resistance. When this functional approach is applied for ecological intervention, restoration practitioners can select species with a better match to future environmental conditions of MTEs, particularly in large species sets