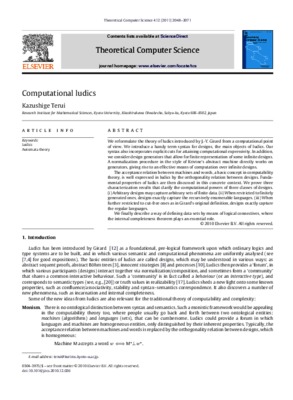 AbstractWe reformulate the theory of ludics introduced by J.-Y. Girard from a computational point of view. We introduce a handy term syntax for designs, the main objects of ludics. Our syntax also incorporates explicit cuts for attaining computational expressivity. In addition, we consider design generators that allow for finite representation of some infinite designs. A normalization procedure in the style of Krivine’s abstract machine directly works on generators, giving rise to an effective means of computation over infinite designs.The acceptance relation between machines and words, a basic concept in computability theory, is well expressed in ludics by the orthogonality relation between designs. Fundamental properties of ludics are then discussed in this concrete context. We prove three characterization results that clarify the computational powers of three classes of designs. (i) Arbitrary designs may capture arbitrary sets of finite data. (ii) When restricted to finitely generated ones, designs exactly capture the recursively enumerable languages. (iii) When further restricted to cut-free ones as in Girard’s original definition, designs exactly capture the regular languages.We finally describe a way of defining data sets by means of logical connectives, where the internal completeness theorem plays an essential role