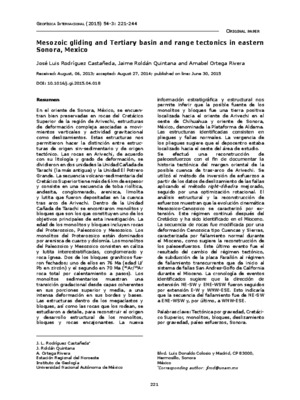 AbstractComplex deformational structures assigned to vertical movements, and gravitational activity, such as gliding, are well preserved in Upper Cretaceous rocks of the Arivechi region, Eastern Sonora, Mexico. These structures allow us to discriminate between synsedimentary and tectonic origins. The rocks at Arivechi have been divided into two units according to their lithology and degree of deformation, the Cañada de Tarachi (oldest) and El Potrero Grande units. The Upper Cretaceous volcano-sedimentary sequence is more than 6km thick and consists mainly of andesite, rhyolithic tuff, conglomerate sandstone, siltstone, and shale-type rocks that were deposited in the Arivechi back-arc basin. Within the Cañada de Tarachi Unit, monoliths and blocks were found; these include rocks dating from Proterozoic, Paleozoic and Mesozoic times. The Proterozoic monoliths are dominated by quartz sandstone and dolomite and the Paleozoic and Mesozoic monoliths consist of limestone, shale, limestone-shale-sandstone, conglomerate and igneous rocks. Two granitic monoliths have been dated, one at 76 Ma (U/Pb zircon date) and the other at 70 Ma (40Ar/39Ar whole rock step-heating). The sedimentary monoliths show gradational transitions from coherent beds to intense deformation along their edges and bases. The structure within the monoliths, blocks and surrounding host rocks was studied in detail. The new stratigraphic and structural data suggest that the monoliths and blocks may have originated at a positive land east of Arivechi, in western Chihuahua and eastern Sonora, Mexico, known as the Aldama Platform. The identified structures consist of folds and normal faults. Fold vergence suggests that the depocenter was located westward of the study area. A paleostress reconstruction documented the tectonic history of the eastern margin of the Arivechi back-arc basin. Stress inversion of fault slip data was achieved by an improved right-dihedra method followed by rotational optimization. The structural analysis and paleostress reconstructions showed that the Mesozoic-Cenozoic kinematic evolution was extensional and continued during Cretaceous times; it has also been identified in Miocene rocks. The rock sequence was modified by basin and range-type normal faulting, as suggested by our paleostress reconstruction. The last event is the result of the beginning of tectonic extension at the onset of the shift from a subduction regime toward a transform fault regime, i.e., from the subduction of the Fallaron plate to the San Andreas Gulf of California fault system during Miocene times. NE-SW and ENE-WSW extension was followed by E-W and WNW-ESE extension. The faulting sequence went from NE-SW to ENE-WSW and subsequently to WNW-ESE