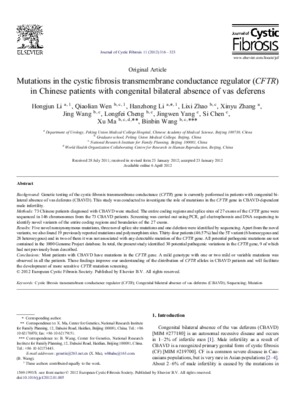 AbstractBackgroundGenetic testing of the cystic fibrosis transmembrane conductance (CFTR) gene is currently performed in patients with congenital bilateral absence of vas deferens (CBAVD). This study was conducted to investigate the role of mutations in the CFTR gene in CBAVD-dependent male infertility.Methods73 Chinese patients diagnosed with CBAVD were studied. The entire coding regions and splice sites of 27 exons of the CFTR gene were sequenced in 146 chromosomes from the 73 CBAVD patients. Screening was carried out using PCR, gel electrophoresis and DNA sequencing to identify novel variants of the entire coding regions and boundaries of the 27 exons.ResultsFive novel nonsynonymous mutations, three novel splice site mutations and one deletion were identified by sequencing. Apart from the novel variants, we also found 19 previously reported mutations and polymorphism sites. Thirty-four patients (46.57%) had the 5T variant (6 homozygous and 28 heterozygous) and in two of them it was not associated with any detectable mutation of the CFTR gene. All potential pathogenic mutations are not contained in the 1000 Genome Project database. In total, the present study identified 30 potential pathogenic variations in the CFTR gene, 9 of which had not previously been described.ConclusionsMost patients with CBAVD have mutations in the CFTR gene. A mild genotype with one or two mild or variable mutations was observed in all the patients. These findings improve our understanding of the distribution of CFTR alleles in CBAVD patients and will facilitate the development of more sensitive CFTR mutation screening