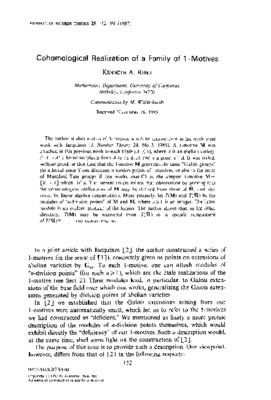 Cohomological realization of a family of 1-motives

AbstractThe author studies a class of 1-motives which he encountered in his work joint work with Jacquinot (J. Number Theory 24, No. 3, 1986). A 1-motive M was attached in this previous work to each triple (A, f, α), where A is an abelian variety, f: A → A′ a homomorphism from A to its dual, and α a point on A. It was stated, without proof, at that time that the 1-motive M generates the same “Galois groups” (in a literal sense if one discusses n-torsion points of 1-motives, or else in the sense of Mumford-Tate groups if one works over C) as the simpler 1-motive M = [Z → A] which “is” α. The present article refines that observation by proving that the cohomological realizations of M may be derived from those of M, and vice versa, by linear algebra constructions. More precisely, let T(M) and T(M) be the modules of “n-division points” of M and M, where n ≥ 1 is an integer. The latter module is an evident quotient of the former. The author shows that, in the other direction, T(M) may be recovered from T(M) as a specific subquotient of T(M)⊗ 2