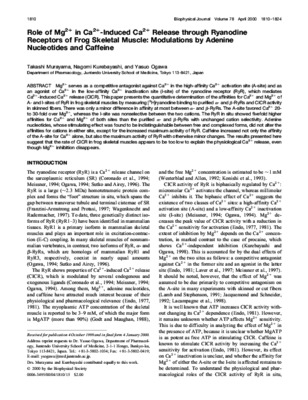 Role of Mg2+ in Ca2+-Induced Ca2+ Release through Ryanodine Receptors of Frog Skeletal Muscle: Modulations by Adenine Nucleotides and Caffeine

AbstractMg2+ serves as a competitive antagonist against Ca2+ in the high-affinity Ca2+ activation site (A-site) and as an agonist of Ca2+ in the low-affinity Ca2+ inactivation site (I-site) of the ryanodine receptor (RyR), which mediates Ca2+-induced Ca2+ release (CICR). This paper presents the quantitative determination of the affinities for Ca2+ and Mg2+ of A- and I-sites of RyR in frog skeletal muscles by measuring [3H]ryanodine binding to purified α- and β-RyRs and CICR activity in skinned fibers. There was only a minor difference in affinity at most between α- and β-RyRs. The A-site favored Ca2+ 20- to 30-fold over Mg2+, whereas the I-site was nonselective between the two cations. The RyR in situ showed fivefold higher affinities for Ca2+ and Mg2+ of both sites than the purified α- and β-RyRs with unchanged cation selectivity. Adenine nucleotides, whose stimulating effect was found to be indistinguishable between free and complexed forms, did not alter the affinities for cations in either site, except for the increased maximum activity of RyR. Caffeine increased not only the affinity of the A-site for Ca2+ alone, but also the maximum activity of RyR with otherwise minor changes. The results presented here suggest that the rate of CICR in frog skeletal muscles appears to be too low to explain the physiological Ca2+ release, even though Mg2+ inhibition disappears