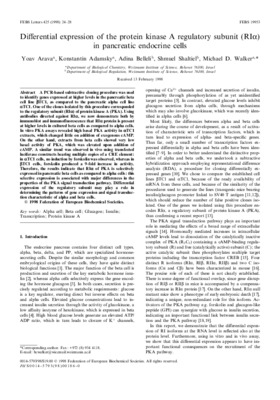 AbstractA PCR-based subtractive cloning procedure was used to identify genes expressed at higher levels in the pancreatic beta cell line βTC1, as compared to the pancreatic alpha cell line αTC1. One of the clones isolated by this procedure corresponded to the regulatory subunit (RIα) of protein kinase A (PKA). Using antibodies directed against RIα, we now demonstrate both by immunoblot and immunofluorescence that RIα protein is present at higher levels in cultured beta cells as compared to alpha cells. In vitro PKA assays revealed high basal PKA activity in αTC1 extracts, which changed little on addition of exogenous cAMP. On the other hand, extracts from beta cells showed very low basal activity of PKA, which was elevated upon addition of cAMP. A similar trend was observed in vivo using transfected luciferase constructs bearing multiple copies of a CRE element: in αTC1 cells, no induction by forskolin was observed, whereas in βTC1 cells, forskolin produced a 9-fold increase in activity. Therefore, the results indicate that RIα of PKA is selectively expressed in pancreatic beta cells as compared to alpha cells: this selective expression is associated with major differences in the properties of the PKA signal transduction pathway. Differential expression of the regulatory subunit may play a role in determining the patterns of gene expression and signal transduction characteristic of alpha and beta cells