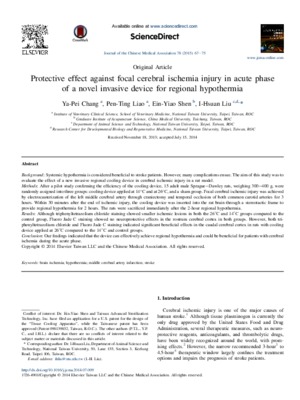 AbstractBackgroundSystemic hypothermia is considered beneficial to stroke patients. However, many complications ensue. The aim of this study was to evaluate the effect of a new invasive regional cooling device in cerebral ischemic injury in a rat model.MethodsAfter a pilot study confirming the efficiency of the cooling device, 15 adult male Sprague–Dawley rats, weighing 300–400 g, were randomly assigned into three groups: cooling device applied at 14°C and at 26°C, and a sham group. Focal cerebral ischemic injury was achieved by electrocauterization of the left middle cerebral artery through craniectomy and temporal occlusion of both common carotid arteries for 3 hours. Within 30 minutes after the end of ischemic injury, the cooling device was inserted into the rat brain through a stereotactic frame to provide regional hypothermia for 2 hours. The rats were sacrificed immediately after the 2-hour regional hypothermia.ResultsAlthough triphenyltetrazolium chloride staining showed smaller ischemic lesions in both the 26°C and 14°C groups compared to the control group, Fluoro Jade C staining showed no neuroprotective effects in the rostrum cerebral cortex in both groups. However, both triphenyltetrazolium chloride and Fluoro Jade C staining indicated significant beneficial effects in the caudal cerebral cortex in rats with cooling device applied at 26°C compared to the 14°C and control groups.ConclusionOur findings indicated that the device can effectively achieve regional hypothermia and could be beneficial for patients with cerebral ischemia during the acute phase