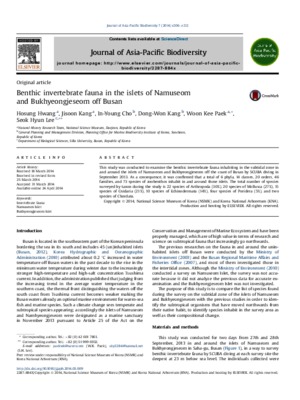 AbstractThis study was conducted to examine the benthic invertebrate fauna inhabiting in the subtidal zone in and around the islets of Namuseom and Bukhyeongjeseom off the coast of Busan by SCUBA diving in September 2013. As a consequence, it was confirmed that a total of 6 phyla, 14 classes, 20 orders, 46 families, and 73 species of zoobenthos inhabit in and around those islets. The total number of species surveyed by taxon during the study is 22 species of Arthropoda (30%), 20 species of Mollusca (27%), 15 species of Cnidaria (21%), 10 species of Echinodermata (14%), four species of Poridera (5%), and two species of Chordata